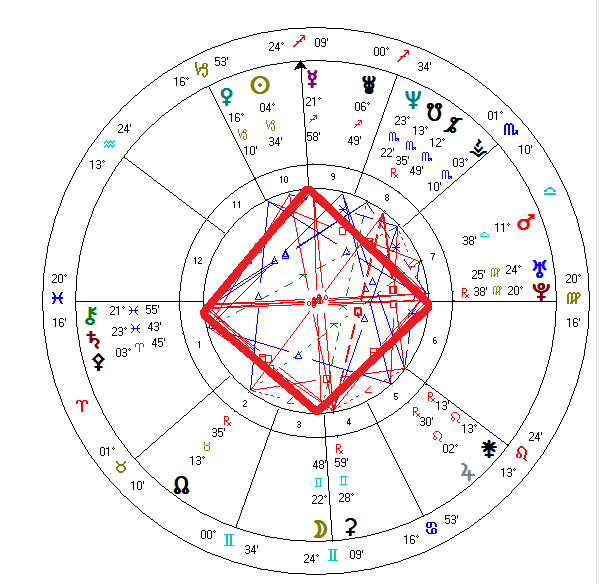 A Grand Cross, also known as a Grand Square occurs in an astrological chart when four or more planets form four square aspects and two oppositions among them. Picture a perfect square, with the diagonal lines drawn in across the center of the box; the corners of the square represent the four planets, the outer lines of the box represent the square aspects among the four planets, and the diagonal lines inside the box represent the two opposition aspects between the planets.

Whew, what a mouthful! And so is the influence of a Grand Cross in an astrological chart. Squares and oppositions are considered ‘hard’ aspects -- producing conflict and tension -- so you can imagine what all these squares and oppositions among four or more planets might produce. Stress of major proportions!

As if the four different planets are pulling on them, a person with a Grand Cross in their birth chart feels pulled in all different directions. They feel overcommitted, as if they can never get enough time to meet all their responsibilities, much less relax for a minute or two.

But the effects of a Grand Cross aren’t all negative. Anyone with this configuration in their chart possesses a huge amount of inner strength. Their challenges in life only add to their sense of determination and their will to achieve. And they have a choice to make in life:

They can either run around in circles, defeating themselves again and again; or they can learn to focus their considerable energy and strength, find their center and really make life work for them.