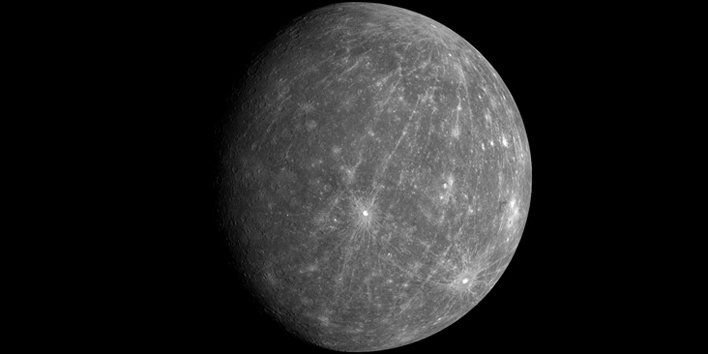 Mercury, long considered the 'Messenger of the Gods,' is the closest planet to the Sun and quickly zips around the Sun in a mere 88 days. From our perspective here on Earth, Mercury is never more than 28° from the Sun; in fact, it is often even closer, which means that Mercury is always in either the same Zodiac sign as the Sun, the sign just before or the sign just after.

Mercury appears to go retrograde three times a year for approximately 21 - 22 days at a time, reminding us Earthlings to slow down and move more cautiously, by choice or by force. This planet’s retrograde periods are often held responsible for everything from traffic accidents to computer crashes to misunderstandings between lovers!

Mercury's close proximity to the Sun makes it very difficult to see. It appears for only two weeks at a time, alternating as a morning star and an evening star and disappearing for a couple weeks in between. It is never visible from areas of the world with high latitudes. If you’re lucky enough to see it, look for a bright, twinkling star near the horizon shortly before dawn or after sundown.

Mercury returns to its original position in the natal chart approximately once a year. When this occurs, it offers an opportunity to recharge the mental batteries. Pondering what one has learned in that year and how one’s thinking has evolved is a very effective activity at this time.